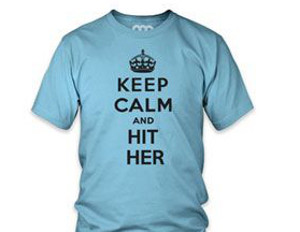 Solid Gold Bomb, the company behind the t-shirts, apologized for the shirts and said they were computer generated via an “automatically generated scripted computer process running against 100s of thousands of words.â€ The apology also said the company did not condone rape and that the t-shirts in question would be deleted.

Yahoo! Finance pointed out that Amazon profited from the sale of the T-shirts, assuming it took its typical 7 percent cut. UK deputy Labour leader, Harriet Harman, insisted the company should give all profits to a women’s refuge for the absolutely outrageous designs.

“These T-shirts are not harmless fun. They are dangerous and intimidating. In promoting rape and normalizing abuse, they create a context in which violence against women is acceptable,â€ said Sophie Bennet, campaigns and policy officer for Object, a UK women’s rights organization.

Black Lawmaker Under Fire for Statement about Female Interns

Bringing African Americans Back into Baseball