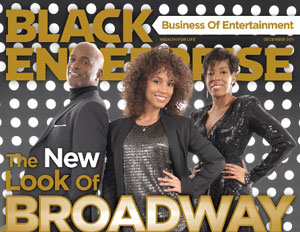 Alicia Keys Presents Stick Fly reads the marquee on Broadway’s Cort Theater. The 14-time Grammy Award-winning singer-songwriter and the play, written by African American playwright Lydia R. Diamond about a well-to-do black family vacationing on Martha’s Vineyard, are newcomers to the Great White Way. As a co-producer, Keys didn’t just invest money or lend her name to Stick Fly‘s marketing strategy. She has been instrumental in bringing the play to the Broadway stage.

Since its 2006 theater debut, the critically acclaimed play has enjoyed successful regional productions in Chicago, Los Angeles, Boston, and Washington, D.C. “A colleague saw the play and said it was an amazing piece,â€ says Keys. “When I read it and when I saw it, I was moved.â€ Keys joins Tyler Perry’s longtime producing partner and casting director Reuben Cannon on Stick Fly‘s production team.

Keys has expanded her creative wings by scouting for film, television, and other projects. This fall she made her directorial debut with “Lili,â€ part of the short film anthology Five, about breast cancer survivors. It aired on the Lifetime network. “One of my goals is to help bring forth stories that have variety to them, stories that you don’t often get to hear,â€ Keys says. With a $2.9 million budget, Stick Fly will need an audience capacity of about 60% during its run to recoup its production costs.

Sparks of color are shining on the Great White Way this winter with shows such as Stick Fly. Among roughly 33 plays and musicals to open during the 2011—2012 season, five feature prominent African American characters, actors, or storylines. There’s The Mountaintop, written by Katori Hall, with Hollywood A-listers Angela Bassett and Samuel L. Jackson; and The Gershwins’ Porgy and Bess, Suzan-Lori Parks’ reimagined version of the folk opera starring four-time Tony Award-winner Audra McDonald. In the works for spring productions are a multiracial revival of A Streetcar Named Desire and Magic/Bird, about NBA legends Earvin “Magicâ€ Johnson and Larry Bird.

This current season may be historic because three African American female playwrights–out of six shows by women–have high-profile productions. Both Hall and Diamond are making their debuts (Parks is the third). Lynn Nottage, an acclaimed author of several plays, is yet to have her work produced on Broadway, but now there’s talk of taking her off-Broadway production, By The Way, Meet Vera Stark, starring Sanaa Lathan, to the main stage next year.

(Continued on next page, plus behind the scenes footage from cover shoot on last page)