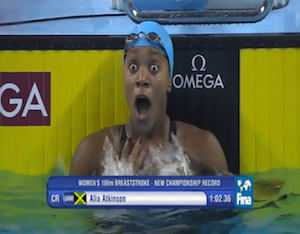 It was the look on her face that emoted the loudest.

Alia Atkinson, 25, etched her name into the history books by becoming the first black woman to win the 100m breaststroke. Competing against Olympic champion Ruta Meilutyte of Lithuania, the FINA World Swimming Championships in Doha, Qatar. Championships was Atkinson’s place to shine – and she did it in grand fashion.

The big upset over the favorite from Lithuania, Atkinson also set a world record by completing the short course race (25m) in 1 minute and 2.36 seconds. “I realized I was catching up so I was just trying to get a good finish,” she told the official FINA website. “I’m not used to seeing my name up in number one so it was kind of a shock, but a good one!” Atkinson’s late charge past the 17-year-old Meilutyte came as the two were venturing down the final length of the 25-meter pool.

The Texas A&M alum has been steadily improving since claiming gold for the university at the 2010 NCAA championships. She previously had wins at the 2007 Pan American Games in Rio de Janeiro, Brazil, where she set the Jamaican record in the 100 fly; and the 2006 Commonwealth Games. To put this win into context, Atkinson’s win comes some 40 years after Enith Brigitha of the Netherlands set a world record in the pool.

With all those accolades and history-shattering moments to go with the win, Alia Atkinson’s expression truly is priceless.

You can watch it for yourself below:

POLL: Do You Think Athlete Protests Should Be Fined?