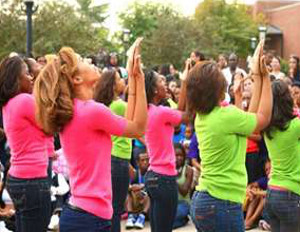 The members of Alpha Kappa Alpha, Inc., the Greek letter organization being sued by two prospective members for human rights violations, have responded to the lawsuit, the Root reports.

Laurin Compton and Lauren Cofield, two seniors at Howard University, say the AKAs violated the D.C. Human Rights Act in their pledging process. The two say they suffered “emotional harm.” They also say that because their mothers are AKAs they should not be rejected from the nation’s oldest black sorority. They are calling on the court to stop all pledging activity of AKAs on Howard’s campus until the matter is resolved.

But in their statement to the court to stop the injunction against pledging activity, the AKAs say their legacy clause doesn’t guarantee membership to “legacies” in particular chapters.

“Despite the Plaintiffs’ disappointment and complaints, AKA did not violate the “Legacy Clause” in its Constitution and Bylaws, because that is not a guarantee of membership to a particular chapter, but simply provides for a priority process. More importantly, AKA had no ability to include these young women in the 2013 intake process of its Howard Chapter, because the strict application of membership caps imposed on AKA’s Howard University Chapter, in combination with AKA’s own intake regulations, made their admittance at this time impossible. AKA had no authority to lift or waive these caps. Yet fortunately, all is not lost for these young women, as they have every opportunity to join AKA as Legacy Candidates at the graduate level. “

What do you think of their response?

Brand You: 5 Winning Ways to Sell Yourself

Women of Power Clarion Call: Your True Power Lies Within