Where Did the Racist Post-Election Tweets Come From? 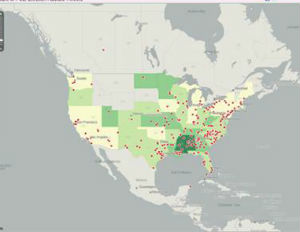 After President Obama was re-elected, lots of people on Twitter who weren’t fans of his took to using racist language to express their displeasure and disappointment. A study by a group of geography experts that looked at the places of origin for those racist tweets found that Mississippi and Alabama were the biggest wellsprings of vitriol, according to the New York Daily News.

Mississippi and Alabama had the highest ratio of racist tweets. They were followed by Georgia, Louisiana, Tennessee, forming a “fairly distinctive cluster in the southeastâ€ of online hate speech, the research finds.

North Dakota, Utah, and Missouri also had a high prevalence of racist tweets.

In the west and northwest, there were very few racist tweets, with the exception of Oregon, the map indicates. Rates of racist tweets compared to overall Twitter usage was also low in the Northeast, the research found.

Read the whole story at the New York Daily News.