Afro-Punk Returns for 8th Year of Rock, Food and Networking 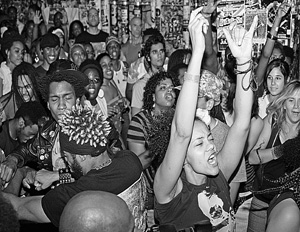 This weekend, tens of thousands are expected to flock to Commodore Barry Park in Brooklyn, New York, for the 8th annual Afro-Punk Festival. Entertainers including Erykah Badu, Janelle Monae, and Gym Class Heroes will be hitting the stages, and there will be skateboarding, food trucks, and, presumably, lots of black folk with mohawks.

The festival was birthed in 2004 from the Afro-Punk movement, which prides itself as “the other black experienceâ€ and began with a 2003 documentary of the same name. In the film, producer Matthew Morgan and director James Spooner gave audiences a glimpse of black punks in America as Afro-Punk was shown everywhere from living rooms to college campuses (“One particular professor used it to show that black kids were not only to R&B and hip-hop,â€ Morgan says).

Today, Morgan is expanding the goals of Afro-Punk: “Initially, it was just about addressing the imbalance in music. … Now it’s the imbalance that is media, in terms of how we’re viewed in the media and how we’re portrayed. It’s not 360 degrees of what we are; it seems to just always be a monolith.â€ Here he speaks with BlackEnterprise.com about the Afro-Punk festival and the future of this culture movement.

BlackEnterprise.com: Explain your decision to make the festival free.

Morgan: That decision is really based on the belief, or the understanding, that we don’t pay for things that we do not understand. And if you’re a young black kid, and you don’t know really what a festival is and don’t know what you’re going to get from it, you’re not going to pay 150 bucks for it. If you give something so people understand what is, they’ll then feel good about buying a ticket to another festival or a black festival somewhere else.

We’ve got to help teach the audience and bring new things to them, open their minds to skateboarding–which we’ve done–to BMX, to art, to all these things that if you don’t have peer, or you don’t see somebody else that looks like you doing it, it’s not often the first thing that you do. So it was very important for us [for] New York… to be like our tent pole event, but Chicago and Atlanta are going to have to pay.

When you first introduced this idea, how were you able to attract sponsors?

Sponsors are very difficult, because most brands don’t [care] about black people. There are obvious candidates that always seem to support the African-American market, and those same dollars have to be distributed across many mouths, and if it’s anything out of the box, it’s very difficult to get our hands on. We have been extremely fortunate because we’ve had individuals at certain corporations that are kind of vanguards at that corporation, and being people of color–particularly one at Pepsi that supported us and the old head of marketing at Nike–they’re people that have young kids, or teenage kids, that when we walk into the office, they understand exactly what we’re talking about because their kids are those kids. And those are the times that we’ve been supported by brands. We have been supported and we have had support, but we do not get the type of support, at the moment, because we are a little different, and we’re very hard to kind of get your heads around when you just got your head around hip-hop.

Yandy Smith: Getting Back on the Grind After Giving Birth