African Americans Use Technology More Than Others For Worship Services 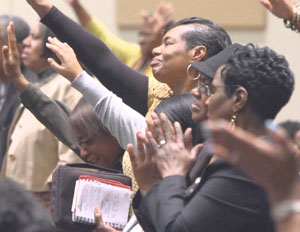 African Americans are more likely than the general population to view technology as playing a positive role during church service. AT&T calls this a cultural shift in how people reach for their daily inspiration.

These findings come from a research survey conducted by AT&T, which also revealed 41% of people use a mobile phone, tablet or laptop to connect to faith-based organizations or inspiration sites. That compares to about a third, 32%, who say they regularly attend worship services. Among those who attend services regularly, 25% report using a mobile device as part of that experience.Â The research is part of AT&T’s Inspired Mobility, part of a national conversation that highlights how people use mobile technology, devices, and the Internet to enhance their faith and inspiration.

The study found that 57% of African Americans use mobile devices to connect to faith and inspiration sites and groups. That compares to 46% of Hispanics, 38% of Asians, and 37% of whites. Across all groups, 72% of those who use mobility to connect with their faith report using social media to do so, with Facebook and YouTube used most. The report also found that the younger the person, the more likely they are to use social media to connect with faith-based organizations, with 18-24 year olds leading the way at 85%. What’s more, people in the South were more likely than people in any other region to connect to faith with online worship.

About one-third of the respondents also admit to using their mobile device to engage in activities unrelated to the service they were attending.Â The most popular activities were texting a friend (15%), posting to social media (8%), watching a video (7%), even gaming (4%) and other things (6%).

“People use their mobile devices to manage their lives and access their passions,â€ says Jennifer Jones, AT&T’s vice president of diverse markets. “This research shows that their faith and inspiration practices are no exception.â€

BlackEnterprise.com caught up with Jones, as well as Jason Caston, former manager of digital platforms and innovation for TD Jakes Ministries and currently the creator of the iChurch Method and lead on AT&T’s Inspired Mobility.

BlackEnterprise.com: What was the inspiration behind the Inspired Mobility campaign?
Jones: This started several years ago, looking at the most popular apps. We saw especially among African Americans that the Bible app was very popular. We found that to be interesting and wanted to go a little deeper. So, through a series of surveys that we did on our own and in conjunction with others, we started to learn more and decided that this was a great opportunity to have for a broader conversation about how people, African Americans in particular, are using technology tools to broaden and enhance their faith.

What were some findings of the survey that stood out to you?
One was the use of technology as part of the faith or worship process. We saw that was definitely higher among African Americans who were utilizing their mobile devices as part of the service. So, instead of bringing and using their physical book Bible they are utilizing an app to follow along with the scripture. They are utilizing their devices to engage when they were away from a physical structure of a worship house–everything from live streaming of a service to daily devotionals, even having conversations on Twitter and other social media. Some congregations encourage their members to engage in social media as part of the service. The more formal the environment (or religious) the less use of technology. The use of technology was higher among Christians,but it was across all religious.