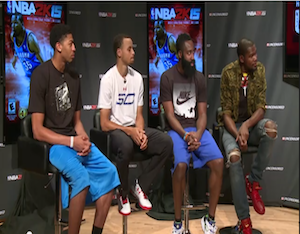 Although NBA teams are scouring the planet to find diverse players to expand the league’s reach internationally, viewership amongst African-Americans in the U.S. is still tops.

According to Nielsen’s 2014 Year in Sports Media Report, African-American viewership of the NBA increased by 63 percent over the last ten years. During this same period, we have seen NBA teams diversify their rosters with players from Argentina, Australia, Brazil and several other countries, confirms the NBA. The San Antonio Spurs is a leader in diversity. The Spurs won the 2014 NBA championship with nine players that represented seven nationalities outside the U.S.

Overall, more multicultural audiences watched the 2013-2014 NBA season than white audiences, with Asian-Americans and African-Americans leading the pack. “While all fans have spent more time watching the NBA over the past decade, the jump in African-Americans’ time spent watching among all ethnicities’ TV viewership has been astounding–a 63% increase from the 2003-2004 season to the 2013-2014 season,â€ states the Nielsen report.