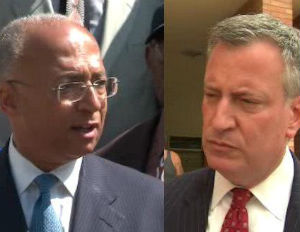 With the third term of Mayor Bloomberg swiftly coming to an end, a race is ensuing between Democrats Bill de Blasio and Bill Thompson, according to theGrio.

De Blasio is a white man with interracial children who has been a critic of the Stop and Frisk policy. Thompson, an African American man, went up against Bloomberg in the last election but is seeing lackluster support the second time around.

The primary, which is scheduled for Sept 1oth, shows that De Blasio is a favorite for 34% of polled African American democratic voters.

4 Tech Investments Your Startup Should Splurge On Early