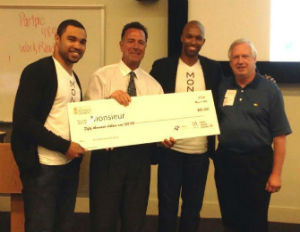 The Technology Association of Georgia,Â Venture Atlanta, and the Metro Atlanta Chamber have announced the winner of the 2014 business launch competition.

The judges selected Monsieur, developers of an artificially intelligent robotic bartender as the winner of the 9th annual Business Launch competition.

Monsieur beat out three other start-ups in the final round of a bracket competition held May 5Â at the G. Wayne Clough Undergraduate Learning Commons on Georgia Tech’s Campus.

TAG President/CEO Tino Mantella applauded the young tech start-up and the other finalists saying, “We congratulate Monsieur and all of the companies who participated in this year’s extremely strong competition. We look forward to the growth and continued success of these companies and we thank all of our sponsors and volunteers who have made the TAG Business Launch Competition possible.â€

According to the company website, Monsieur’s technology can be used either at home or commercially in arenas, stadiums, restaurants and bars.

On the website, the company pitch promises users to, “Put your personal bartender in the palm of your hand”.

It also promises, “No more searching for recipes catering to a user’s taste by making intelligent recommendations and to completely transform the drinking experience.”

According to engadget, ingredients are stowed in 1.5-liter bottles behind a removable panel at the rear of the machine and quick-connect hoses link up to the pump mechanism inside.

As a result of the win, Monsieur will receive $50,000, a spot in Venture Atlanta and more than $100,000 in donated services from the Atlanta business community to help them grow.

The company is being advised by Paul Judge, PhD of Judge Ventures. Judge is a Morehouse College and Georgia Tech Alum, and the inventor of over 30 patented and patent-pending computer technologies.

Partpic, another African American start-up and developers of a visual search technology also made it to the final round of the competition.

Their software allows users to locate replacement parts by sending pictures. Their visual search technology recognizes the parts and then alerts salespeople.

Partpic CEO Jewel Burks says, “I’m appreciative for the opportunity to participate in the TAG business launch competition. The exposure and chance to get my company, Partpic, in front of the Atlanta Tech community has been invaluable.”

Partpic is advised by Covello, a minority-owned collaborative that serves as a “disruptive innovation engine for corporations, start-ups and creatives.”

According to a press release put out by TAG, Partpic along with two other finalists will split the more than $200,000 in remaining pro bono services, including legal counsel, professional consulting, marketing, software and real estate space.

The press release also states that since it started in 2006, “The TAG Business Launch competition has become one of largest competitions of its kind in the United States, providing $500,000 in cash and over $1,500,000 in donated services to more than 200 young entrepreneurs.”

Applicants are screened by an experienced panel of entrepreneurs and the most promising companies are assigned a mentor for the duration of the competition.

Entrepreneurs Conference: How to Grow, Protect and Distribute Your Assets