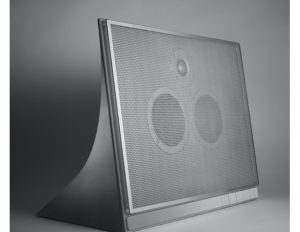 Adjaye’s unique design, coupled with Master & Dynamic’s technology, produces a number of acoustic benefits. Made from a composite concrete, the speaker offers “increased dampening, reduced resonance from the enclosure, a purer sound, and added durability,â€ according to a press release from Master & Dynamic.

“This speaker is not about the traditional idea of making boxes, but about a directional form. I became fascinated with the idea of using triangles to break down the mass of the box, and to see if we could dissolve the sense of volume through sculptural detail,â€ said Adjaye, in a released statement. “We created a new geometry for this speaker; a new geometry of sound.â€

In January of this year, it was announced that the Ghanian-British Adajaye was to be knighted by the Queen of England. A statement from The Central Chancery of the Orders of Knighthood at St. James’s Palace said that David Adjaye was being recognized for his “contribution to architecture and designâ€ and as one of the leading architects of his generation and a global cultural ambassador for the U.K.â€

And, on Friday, it was announced that Adjaye had made TimeÂ magazine’s “100 Most Influential People” list.

Put to Use These Savings Vehicles That’ll Drive You Home