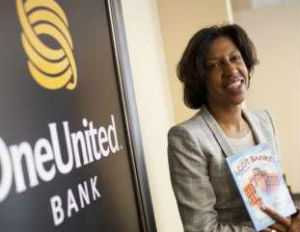 Major studies show that African-American families, along with their Hispanic counterparts in theÂ US, still occupy the bottom rung of the economy. The problem is largely due to the fact that African Americans have little or no money saved in retirement accounts, invested and do not own homes, largely because money management has not always been a high priority in a culture.

The first step in this process is for African Americans to become more keenly aware of the need to save, invest, and plan for the future. OneUnited Bank,Â the largest African-American owned bank in America, is helping this effort in their recent launch of the “Comeback Cardâ€ on January 15th to support the financial comeback many are experiencing in America by helping to build and rebuild credit.

Teri Williams is responsible for implementation of the Bank’s strategic initiatives, as well as the day-to-day operations of the bank. Under her leadership, OneUnited Bank has consolidated the local names, and The Harvard and Brown University graduate brings 25 years of financial services expertise from premier institutions such as Bank of America and American Express, where she was one of the youngest Vice Presidents.

BlackEnterprise.com caught up with OneUnited Bank President Teri Williams as she discusses the challenges that African Americans face with wealth management, the importance of utilizing the “Comeback Cardâ€ to rebuild and maintain credit and fiscal lessons for millenials.

BlackEnterprise.com: Why was it important to launch the Comeback Card?

How does this card compete with other secured credit cards on the market such as the Capital One card?

There are features of the card that are more competitive than other cards and also, the philosophy that accompanies it. The feature is that the rate is lower and it has a fixed rate, as opposed to a variable rate. In today’s environment where interest rates are low, as other credit card companies continue to increase the rates on these secured cards [are going to rise even further], ours is a fixed rate. We also offer a wider range of credit limits ($250 to $10,000). Other cards that are out there are much less than that. For those that have less resources but want to improve their credit this will serve as a great option.

The other feature is that we have a philosophy – it is more than a card. It’s a program to help you rebuild your credit. It is a credit card, and viewed by the world as a credit card. In addition, we provide a whole program that educates you and prompts you to do the right thing with your credit. People are unaware of a lot of things they can do to improve their credit score. What we try to do is to educate and promote to help people get on the right track to better credit. This isn’t just to get another card in someone’s hand. What we’re looking at is a holistic view of a community and individuals who have hit a bump and need some help getting on their feet.

Many are uneducated about the importance of good credit — how can we educate urban youth at an earlier age?

This is actually a subject that is near and dear to my heart. I wrote a children’s book “I Got Bank.â€ It’s a great story, and entertaining while also educational. The reason I wrote the book is that I saw that the information and books I saw to educate youth didn’t speak to our community in a way we could understand and enjoy. At first, I thought it was going to be a pamphlet, but the characters in the book just spoke to me, and it ended up turning into a book.

The main character is 10 years old, living in an urban community and saves some money because his granddad had some money going directly to a bank account. He’s trying to preserve his money while other members in his family are trying to spend it. He wants to do what his grandfather taught him, while also saving his money. In our community, you’re lucky if you have one or two people in your family who understand money, but the needs of the family tend to be much greater. A lot of us struggle with trying to move forward financially with helping our brothers and sisters. It’s very helpful for our community to know. The United VISA is really saying that to our community, but the goal is to educate people in a way that they can relate.

Did your parents teach you at a young age about fiscal responsibility? At what age?

I grew up in a family with no resources. We were poor and lived in the projects in a rural community with dirt roads. My parents were good, smart people who both had jobs. But as a child I just could not understand. My parents opened up a savings account for me, and I remember watching them sitting at the table paying bills. I saw the progression from living in the projects and moving to a house at 10. I knew there was more than what they could teach me, but I couldn’t really define it. I finally learned this through my life and through mentors. I was able to get a good education (Brown then Harvard) because people took an interest in me. Being in banking for 30 years, I have become very wise with money.

Sometimes we make decisions that screw up our credit and put us behind because we don’t understand the importance of good credit. Credit scores are becoming increasingly important. Today, a lot of the credit decisions are based on these regression models that say based on credit you’ve had, how you’ve paid your bills, your income..etc, the decision is yes or no. Really having a good score is helpful because that’s how decisions are being made. It’s really important that people are improving their credit score.

There are things people could do to change their economic situation if they were made aware. I’m amazed that people don’t understand if they don’t pay their utility bill, it can hurt them by showing up on their credit score. If we’re educated we can avoid some of the pitfalls.

The reason we call this the “Comeback Card,â€ and I want to make this very clear, is that you CAN come back. There are so many messages that are negative out there. Everyone can come back. Everyone can improve their economic situation. I’ve lived all sides of the financial spectrum.

Was banking always your passion?

When I was younger I loved math and puzzles. To some degree what I’m doing today is solving puzzles. People come and have a picture of their lives. What I try to do is to change or improve their life by giving them tools. To some degree my passion is still what I’m doing today. I would not have been able to say as a child that I like puzzles so I want to be a banker. I get up every day and I’m passionate about what I do. I feel as though I’ve never worked a day in my life. My message when I always go to schools and speak to students is to “follow your passion.â€ The money will always come. If you’re working at a job /career that you’re not passionate about you will not be able to compete with someone who has that passion.

Tips for raising your credit score and maintaining good credit.

The number one thing even before getting the secured card is to order a free credit report online. Most people have incorrect information on their credit report that can be bringing down their credit. Sometimes there are duplicate entries and inaccuracies. It’s important that people order their credit report, and make sure it’s accurate. Most people have done that. Also, update your address with the credit bureau. If you’ve moved and you apply for credit and the credit bureau has your old address, there can be an issue with them not believing you are who you say you are.

The second thing is for people to try and take a look at their overall picture. Be honest with yourself — is your problem that you’re not making enough money, or you’re spending too much money. Is it the income or the expenses?

What tips can you offer millenials with major student loan debt?

The provider of your student loan will work out a payment plan for you. Do not assume that the plan that you are currently paying is the best plan for you. They want you to be able to pay over the long term. In most cases, it’s better to pay over a longer period of time, than struggling to pay. What firms look for is for regular payments more than the amount of each payment. Making smaller payments is better for them and better for you.

Have more realistic expectations, but get that you will get to where you want to be. Maybe you need a roommate or need to cut some expenses. I thought my loans were so large at the time, but when I look back they really were not that large. You will look back and say, that was a really good investment in ME.

For more information on the UNITY “Comeback Cardâ€ visit: www.oneunited.com.

Why Your Small Business Needs a Marketing Plan