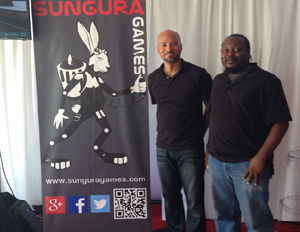 The 2015 African American Festival in Baltimore, Maryland not only celebrated black art, music, culture, and achievement, but it also celebrated the breaking of molds and exhibited possibility in African American contribution in the predominantly “other” gaming market.

Business owners and full-fledged gamers Derek Manns of Sungura Games and Dennis Mathews II of Revelation Interactive Game Development and Entertainment held down the Toyota Tech Playground at AAF where they talked diversity in gaming while displaying an interactive game they created in just three weeks. The newly developed game centered around an African American character in a genre where this particular race of players typically goes unnoticed. BlackEnterprise.com caught up with Derek L. Manns and Dennis Mathews II to gauge their scoop on the gaming industry and their goals in ensuring black people have a seat at the head table when creating quality innovative and interactive video games.

BlackEnterprise.com: What exactly is Sungura Games?
Manns: Well, Sungura is Swahili for rabbit. A mother’s friend used to call me rabbit because he said I was fast. It’s synonymous with clever, really. Sungrura Games = clever games.

How did you get started with Sungura Games?
Manns: Really, I started making games on consoles and PCs long ago and later decided to start own company. I wanted to make games that African Americans can relate to. Don’t get me wrong, I’m open to making any kind of game, but there is a representation missing from the African American community, and I wanted to play an active role in resolving that.

How did you get started with Revelation Interactive?
Mathews: I was initially doing aerospace engineering but later [around 2002], I decided to go to Full Sail in Orlando, Florida to study game design and assimilation. I began to place myself around the right people and before i knew it, I was working for Revelation Interactive. I later [around 2009] ran into Derek Manns, Director of Sungura, and have been doing contract development with him alongside my work with RI. Derek designs, I program.

So how did you get into coding?
Mathews: Having an engineering background and being involved in computer science in high school. When I got into college, I played lots of video games–it wasn’t before long that I had the realization that I didn’t just want to play them, I wanted to code them. You have to understand that back then there weren’t any visible career paths for this. There wasn’t any real education for it. So, when I went to Full Sail University for Game Design, it was their second class ever.

After attending school, how did you find employment in the gaming industry?
Mathews: I started to go to gaming conferences to network with people that are now my peers. You had to know people in order to get into the industry. They weren’t hiring from schools. They were hiring from networking opportunities, which is why diversity is a large initiative–mainly because the resources are becoming available to reach more diverse communities, largely through networking.

What exactly is it that makes Sungura Games different from other gaming companies out there?
Manns: We have an interesting model for making games. Our staff is primarily African American and is steady. Most of my staff is based on partnerships. If I need certain things, I try to contract to African Americans but ultimately, I go with anyone who can do the job and of course, is reasonable.

What makes Revelation Interactive different?
Mathews: What makes us different primarily is that the core base of our team is diverse. Our studio is primarily African American and that’s just not prevalent in the industry.

What’s the future of Sungura Games?
Manns: I see us becoming a full fledged development company. I’d live to legitimize and show that we have the skill and experience to make games like any other company.

What made you guys decide to work for yourselves as opposed to joining a pre-existing gaming company?
Manns: I knew this is something I could successfully do myself. I had the knowledge and the resources so I figured why not?
Mathews: I saw the amount of money I was making for other people, and I figured why not make that money for myself.

Derek, what adivce would you have for up and coming African American gamers looking to consider gaming or creating video games as a serious career?
Manns: What I will you say those looking to join gaming is make sure you’re good at math. Also, look into schools that offer gaming in undergrad. I actually didn’t earn my degree in gaming until gaining my masters from Southern Methodist University Guildhall as a Level Design major.
Mathews: Also, check out Blacks in Gaming. There is a whole community out there.

What imprint would you like to leave?
Manns: Listen, black developers are there–we’re out there. Black developers that have the skills to develop these games. I want them to know that we do exists out here. If I have to be that person that’s the Tyler Perry of the gaming industry, then I’m okay with that.

Dennis, is there anything else you would like BlackEnterprise.com readers to know?
Mathews: The urban community needs to know that gaming is a strong career, it pays well, and there are educational resources, both community college and the university level. You can get a masters degrees in gaming. Find one of the increasing number of communities aimed to diversify the presence of blacks in gamings.

FollowÂ @blackenterprise on Twitter. For information about the African American Festival visit www.africanamericanfestival.net.

Here’s some of the fun and festivities from this year’s event at the Camden Yards Sports and Entertainment Complex in Baltimore: Black Enterprise on Instagram and #BEmoreAAF.

‘Marrying Down’ May Cost Educated Women $25K a Year