Actor Gbenga Akinnagbe Stars on New Season of The Following 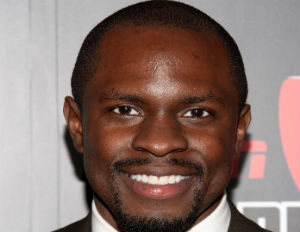 Mention the TV show The Wire, and most think of the unforgettable character, Chris Partlow. The personal protection and assassin of bad boy Marlo Stanfield, Chris -played by Gbenga Akinnagbe – is etched in the memories of die-hard Wire fans worldwide. Flash forward to the present. Gbenga (pronounced “Bang-aâ€) has a long resume of assorted film and recurring TV appearances ranging from Barbershop, Savages, and The Taking of Pelham 1, 2, 3 to small screen roles on The Good Wife, 24: Live Another Day, Nurse Jackie, and his newest role on FOX’s creepy thriller The Following. He recently hit the Sundance circuit withÂ Newlyweeds, a movie he produced. His newest executive-produced film, Knucklehead, featuring actress Alfre Woodard, is currently traveling the festival circuit. When Gbenga is not on the set, he’s a passionate activist traveling the world joining protests, organizing rallies, and promoting social progress through his website and T-shirt line, We Are Liberated People.

Black Enterprise: When you walk the streets, do people still call you “Chrisâ€ from The Wire?

Gbenga Akinnagbe: (Laughing) Every day. And it’s funny, because I don’t even think I look like a Chris. But I’m so used to that name now, when people say, ‘Chris,’ I turn around.

You were on that show for six years. And it was a Christmas treat to so many fans when HBO played every season of The Wire over the holidays.

So many people responded around the world from that marathon.Â It was cool to know that so many were still checking for that show.

Are we going to see a Wire movie?

(Laughing) People have been asking that for a long time. I don’t know. I don’t think the creators of the show are interested in doing that. But the fans have been wanting that for a minute. I wouldn’t be surprised if there was some fan fiction being made around the show. Like comic books, where fans make their own stories and mini movies. I think this is a show where they might do something like that and just post it.

So you’re on The Following now with Kevin Bacon. He’s chasing the cult leader Joe Carroll. Many people die, which makes the show so creepy because you never know who might die. Gbenga, are you going to live?

I do on the first episode.

Nah, I’m just kidding. Â (laughing) You have to wait and see. I think it’s a very creative story arc. I’m involved in a love triangle. I’m dating Kevin Bacon’s niece on the show, and so there’s this other person who she had feelings for prior. So you have to see it. It’s being built up pretty well.

You’ve been able to work back to back, unlike many actors, especially actors of color. You’ve also avoided playing the same “typeâ€ over and over again. How have you managed to mix it up?

I have been very fortunate to play different roles with a wide range and have roles come immediately. I think it’s partly me and the team I cultivate to work with as far as my representation and all of us being on the same page as far as what projects I should do and I like to do. And also I don’t take everything. So after a project comes out, like whether it’s The Wire or another show, and it does well, then a whole bunch of roles like that come out because people want to see you do that role again or variations of it. So you have to be strategic in how you choose roles. I’m not interested, unless it’s a role as good or as multilayered as Chris. I don’t think I need to play a weaker variation of Chris from The Wire.

Talk about We Are Liberated People, your company.

You can findÂ We Are Liberated People at WeAreLiberated.com. It came about because I’ve been a part of a lot of different social movements around the world—protesting in Nigeria with Occupy Nigeria, and protesting here in Brooklyn and standing trial for that, protesting stop and frisk in the West Bank in Israel. So I wanted to make something that showed that the things we’re out there fighting for, all these different people and races, we’re all fighting for the same thing in different parts of the world. So I wanted to make something that showed that we all have the same liberation date. So the company has people-friendly sweatshirts and T-shirts. And we celebrate the nations’ liberation dates. And we’re also getting into personal liberation dates. Whatever that is to you. So it’s been pretty well received. It’s all been fun.

A few months ago you organized a rally and memorial in Brooklyn for the victims of Boko Haram. Why is this way of giving back important to you?

That was a really good experience. We wanted to hold a rally to mark that these people have passed, and to celebrate their lives. A lot of people came out. We had great speakers, performances—it was great. My family didn’t have much money at all. And oftentimes we didn’t have a place to stay. So I’m very grateful for where I am now. I think something in me wants to do what I can to pay it forward. But more importantly, I want to address these things so people don’t have to suffer unnecessarily. I start from a place that there is enough for everyone in the world. It’s just a matter of allocation. So I think if we got together and worked for the better of everyone, we’d all do a lot better.