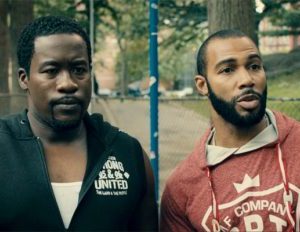 Actor, writer, singer, and activist Daniel Beaty is living a dream. After 15 successful years of Â critically-acclaimed theater productions–including Through the Night, Emergency, Mr. Joy, Breath & Imagination–his outstanding portrayal of Paul Robeson in The Tallest Tree in the Forest, and the widely praised spoken-word masterpiece,Â Knock Knock, which has received more than 13 million views on YouTube, Beaty has co-written and now stars in his first screenplayÂ Chapter & Verse.Â Chapter & Verse was inspired by Beaty’s family; his father and brother have each been in and out of the penal system and suffered many years from drug addiction. His father, Danny Beaty, once a notorious heroin dealer, has been incarcerated more than 60 times.

A native of Dayton, Ohio, Beaty moved to New York City after completing graduate school at the American Conservatory Theatre in San Francisco, just two weeks before September 11, 2001. A Yale University undergraduate, Beaty moved to Prospect Heights in central Brooklyn, where he lived in a room, which he refers to as “a box,â€ for $325 per month. He recalls how he was shaken awake around five o’clock every morning by the roar of semitrailer trucks passing over the nearby Brooklyn-Queen’s Expressway.

Beaty and Joseph first connected through a mutual friend, Voza Rivers, a marketing and theater consultant in New York City. AÂ professor and author, Joseph also spent time in prison, as a result of his association with the Black Panther Party. Joseph and Beaty’s shared similar ideology helped fuel their vision forÂ Chapter & Verse, asÂ both are passionate about the issues of mass incarceration, prison reform, and community activism.

Chapter & Verse is an example of art imitating life, “I think it’s the ability to see members of our community who are often overlooked and don’t have a voice,â€ says Beaty. “It’s the transformative power of love. It’s the myriad of challenges we face in our community; love is the greatest asset.â€

The project was initially launched during a meeting between Joseph and Fuqua, in which Joseph was exploring different writing opportunities and shared a draft of the script. Fuqua was impressed and offered support. “He saw it and loved it,â€ says Beaty. “He started writing notes and making edits. He agreed to lend his name and time to the project.â€

Beaty says his first feature film experience was incredible. “It was the most amazing experience I’ve had to date in my creative career,â€ he says. “Most of the images of [African Americans] in media do not show us in our full humanity. As black men, we are often demonized and sometimes eroticized. I want to be able to use my gift as an artist to reveal our humanity. I believe if we can truly see each other, we will be less likely to try to hurt each other. The desire to use art to help transform and make our world a better place is so important to me. To be able to do that in the medium of film–which can allow us to see at a deeper level, but also reach so many people–is very exciting to me. As a storyteller, that’s the level of revelation I want my art to give.â€

Beaty was instrumental in delivering respected actors Devine and Hardwick to the project, which was filmed in his community of Harlem. He met Devine, who was familiar with Beaty’s theater work, through director Charles Randolph-Wright. Beaty had worked with Hardwick on the New York City poetry scene, and the actor had also attended one of Beaty’s plays at the Public Theater.

Family is very important to Beaty and remains a central focus in his life. He frequently sees his mother, Shirley Nagee, who lives in Ohio and has been a steadfast support for her son. Beaty’s brother, who now lives in Boston, has been in recovery for more than four years. “I’m very proud of him,â€ Beaty says. “He was addicted to crack cocaine, while I was kid. My mother was challenged with how to support her son, who was battling an addiction, but at the same time, not sacrifice the rest of her family. It has been a powerful experience to see him grow and be in a healthy, stronger place. He now has a successful career. He has supported and organized various groups to attend my various theater productions.â€

Beaty mostly visits his father during the holidays. Their relationship has been a long and winding road to healing. “My father still battles addiction, and I had to set some level of boundaries,â€ he shares. “We check in with each other and have some drinks together, occasionally. I now understand that addiction is an illness. This has been at the core of my ability to heal and forgive my father, but also to become an advocate for issues of restorative and transformative justice,” Beaty continues. “The system needs reforming. The people who need addiction recovery services or mental health services are thrown and populated into the prison system. The cycle repeats, and we don’t set them up to get better.â€

With a stellar, multiplatform career established–actor, activist, writer, and producer–and with a feature film under his belt, Beaty is currently writing books for two Broadway-bound productions: Â Nelson Mandela Broadway Musical and The Me Nobody Knows, Broadway Musical Revival. He also has a television project on the horizon, which will be produced by two A-list celebrities.

With so many dynamic projects in the pipeline, Beaty believes deeply that the greatest thing he can do is support young people that have had similar experiences to his own and who have inherited trauma rooted in inequity and limitation. He affirms, “The truth is, we’re full of unlimited possibilities, and with the right awareness and the right support, anything is possible–no matter where you start.â€

Gwendolyn Quinn is an award-winning media consultant with a career spanning more than 25 years. She is a contributor to BlackEnterprise.com and BE Pulse (via Medium.com), Huffington Post and EURWEB.com. Quinn is also a contributor to Souls Revealed and Handle Your Entertainment Business.

Ask BE: Brandon ‘Scoop B’ Robinson Talks Sports And Branding

Ask Sheree: How to Manage an Overload of Work