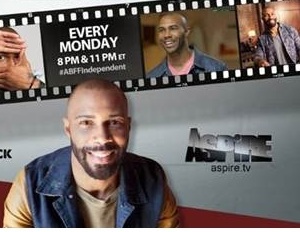 On Monday, Nov. 3, The American Black Film Festival Presents ABFF Independent latest short film entries, ‘Hope Floats.’ The series, which comes on every Monday on the Aspire network at 8 PM, showcases indie films and is hosted by Omari Hardwick.

This episode’s six hopeful films include:

Thula — 15 Min. — Two friends struggle to find peace and forgiveness across continents as they navigate their roles as blood daughter, surrogate daughter, and best friends.

From Prison to NYU — 14 Min. — A short documentary that showcases one man’s shot at successfully redeeming himself against all the odds. It’s a documentary about the determination and love that motivated an African American man to make the journey from incarceration to education.

I’d Rather Be Dancing — 30 Min. — A paralyzed African American dance diva, now wife and mother, confronted by her ex-lover/dance partner, who shows her that the spirit of a dancer doesn’t die with the use of her legs. The bitter choice between her family, her lover and an artistically fulfilling life from her wheelchair, make this decision an intensely poignant spiritual battle between the three great loves of her life. IRBD is a soul searching look at what keeps us bound in our lives mentally, emotionally or physically and is a heartwarming testament to the human spirit.

Crown Heights — 5 Min. — Set during the racially charged Crown Heights, New York riots of 1991, “Crown Heightsâ€ is the story of a young man, Elijah, African-American, who is confronted with a split-second decision whether or not to save the life of an innocent Hasidic Jewish man who’s out alone in the racially mixed neighborhood.Â  Elijah, the sole grocery store bagger in his local neighborhood bodega is fired up, angry about the Crown Heights riots, which occurred because a Hasidic Jewish motorcade struck and killed an African-American boy who was playing along the sidewalk at night.Â  Racial tensions soon flare up throughout the neighborhood, leading two young men into Elijah’s store that night.Â  When they spot Gary, a lone Hasidic Jewish customer, they nod to Elijah to lure the man outside to attack him while he’s carrying his bags to the car.Â  Amidst the anger and anxiety, Elijah has to decide whether or not to side with his race, and friends, and attack the man, or side with the man, and risk getting attacked himself by the local riff-raff.Â  Elijah’s decision, though a very short and quick one, has endless ramifications for himself, his neighborhood, the potential perpetrators, and victim.

Strange Fruit — 11 Min. — On August 7, 1930, two African-American teenagers, Thomas Shipp and Abram Smith, were lynched by a violent mob in Marion, Indiana. Moved by the infamous photograph taken that night, Abel Meeropol, a Jewish high school teacher in New York City, wrote a protest song entitled, “Strange Fruit.” The song soon became a signature of a young jazz singer named Billie Holiday, the unforgettable finale of her live performances, inspiring generations to believe in the power of music and the dignity of the human spirit.

This is the story of an American masterpiece, the song TIME Magazine in 1999 called “the song of the century.” But even more, this is a Good Friday story, an Easter Sunday story, a deeply human story of tragedy, defiance, genius, and grace.

Meet Patricia Cesaire, Co-Host of Our World with Black Enterprise

4 Ways To Get Noticed for the Job You Want