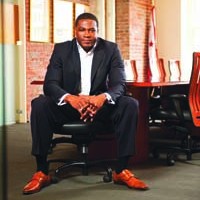 One of the toughest lessons Emmanuel Twum learned his freshman year in college had nothing to do with his coursework in computer science and math. Twum learned–the hard way–how not to handle his money.

Twum’s parents, business owners in Accra, Ghana, would send him $5,000 per semester to buy books and other necessities for his studies at Westminster College in Fulton, Missouri. Like any teenager flush with cash Twum burned through all his spending money halfway through his first semester. He had no budget. He remembers buying school supplies and a pair of Nikes. He also spent upward of $60 a day on meals for himself and his friends. “My first semester I abused the money,â€ admits Twum, now 29 and working in financial advisory services for New River Systems in the Washington, D.C., area.

He was certain that a quick phone call to his parents would solve his financial dilemma. To his surprise, his parents refused to send additional money. “That was a rude awakening for me,â€ says Twum. “At home I had access to everything and didn’t have to worry much about how I spent my money.â€

For the rest of the semester the freshman ditched the high-cost meals, learned to tolerate campus cafeteria food, and lived off the earnings from the $5.15-an-hour work-study job as a network security administrator.

The next semester yielded different results. “I balanced my checkbook and created a budget,â€ recalls Twum, who had $700 left over at the end of his second semester. “That was the first time I started saving,â€ he adds. He took the extra $700 and put it in a savings account. Each semester of college, and through graduate school at DePaul University in Chicago, he continued to put money away and build his account.

Even after he entered the workforce, Twum stuck to his financially responsible ways. He became a homeowner in 2005 and developed a financial plan for his short- and mid-term goals and retirement. He first set up his employer-sponsored retirement fund, to which he contributes 10% of his paycheck.

Twum then established an emergency fund of a year’s worth of living expenses. “I wrote down my expenses, which came to $2,200 per month and multiplied that by 12.â€ “So I decided that, based on my budget, I could save $700 per pay period to reach my goal,â€ says Twum, which he did in a little more than a year. With an emergency cushion in place, he now puts another 6% of his paycheck into a savings account, which currently yields about 1%.

Each December, Twum says he sits down and reviews his financial goals. “They change every year. I may want to make a purchase and need to create a savings plan to reach that goal,â€ he says. For example, three years ago he began thinking of starting a technology consulting firm that will provide financial services such as account fraud analytics and financial advisory planning. To finance his dream, he readjusted his budget and set up a plan to save $250,000 in five years. The centerpiece of his plan: “I just made it automatic,â€ explains Twum. About $700 is deducted from his biweekly paycheck and funneled into an account at his local credit union. He is about two and a half years away from his goal.

As a single young man with no children and a roughly $100,000-a-year salary, it can be tempting to live a spendthrift lifestyle. If he wants to make a purchase he pays for it in cash or sets up a savings plan for it. But, grateful for the lesson from his parents, “I always ask myself, ‘Is it a need or a want?’ If I need it,â€ he says, “I’ll save for it.â€

HOW I DID IT
– Make it automatic. Instead of making savings an afterthought, “Pay yourself first,â€ says Twum. “At least 10%, and don’t give yourself access to it,â€ he adds. No matter how little you have to start with, get in the habit of saving consistently. Have a portion of your paycheck automatically deposited into a savings account.

– Establish an emergency fund. Set aside a certain amount of your income to go into this account each pay period. “I started looking at what my expenses were for the year and then created a savings goal that would protect me if I came across any unexpected expenses,â€ says Twum. “I asked myself, ‘If I were to lose my job, could I survive for the next eight months to a year?’â€ The best place to save your emergency fund money is in an online high-yield savings account or money market account. You want to earn as much interest as possible while keeping the cash liquid and easily accessible.

– Review financial goals annually. “Your goals can change from year to year. So, it’s important to review them at the end of each year,â€ suggests Twum. Your aims, especially long-term goals, will evolve and grow as you get older. It’s important to identify your short-, mid-, and long-term goals. Short-term goals are generally two years while mid-term goals are those you hope to accomplish in five to 15 years. Long-term goals include your ambitions for retirement and how you plan to pass on your wealth.Â

What to Buy in May