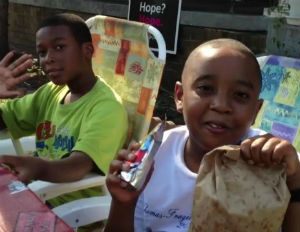 In an update to a story we linked to a few weeks ago from The Grio, a 9-year-old Detroit boy who raised $1,200 for his struggling city has now raised nearlyÂ $4,000.

The Grio reporter Jay Scott Smith has continued following the story of 9-year-old Joshua Smith who has raised close to $3,000 more for the cityÂ through his lemonade stand and donations.

“People handed us another $70 at church on Sunday,â€ Smith told The Grio. “Cards still came in the mail with money in them. I think yesterday was the first time that at the end of the day, there was no money coming in on PayPal, so that’s tapering off. But that’s cool, because I’m starting to wonder, when does it end.â€

Recently, Mayor Dave Bing thanked the young child in a video. Smith also received a $2,000 scholarship from the Rosa Parks Scholarship Foundation contingent on him having a GPA over 2.5 when he graduates high school.

Read the rest of this story at The Grio