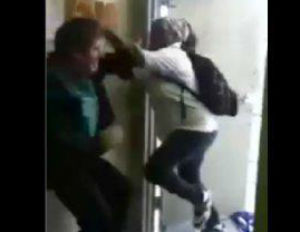 Video has surfaced of a fight between a substitute teacher and a student at the Oakland Unified School District, Bossip reports.

The video of the brawl, captured on a cellphone, shows punching and kicking between the student and teacher, followed by the teacher picking up a desk and thrusting it at the child. The student involved in the video no longer attends the school.

The middle school is one of the toughest in East Oakland.

Read more and watch the video at Bossip