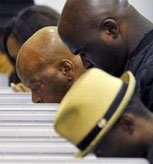 Voter turnout for midterm elections tends to be anemic compared to presidential contests. In 2006, for example, only 45.8% and 38.6% of registered white and black voters, respectively, actually cast ballots. In 2008, however, voters exceeded all expectations, moved by the opportunity to elect the nation’s first black president and his clarion call for change.

As in previous midterms, voters this year will likely express their dissatisfaction with the majority party by staying home or shifting support. Depending on the political analysis, Democrats will realize significant losses in the House or U.S. Senate or participate in a repeat of 1994 when conservatives took control of both houses.

House Majority Whip James Clyburn concedes change has been slow in coming but the upcoming election is all about protecting hard-won reforms. He maintains African American and Latino voters have the most to lose if the GOP takes control. “I’m convinced that if we do not have a turnout in minority communities at least equal to our percentage of the voting population,â€ he says, “we could very well see ourselves turning the clock back on so many issues that were very important to those communities.â€

As voters decide on whether to go to the polls in the next 19 days, lawmakers, activists and political analysts have identified key reasons why midterms are important to African Americans:

THE ECONOMY
Due to the sluggish economic recovery, black joblessness remains staggeringly high. According to the Labor Department’s recent jobs report, black unemployment for September was 16.1% compared to the 9.6% national rate. Although there’s no quick fix on the jobs front, Clyburn maintains, Republicans will push policies that will make matters worse. For example, he charges that the GOP voted 11 times against legislation that would close loopholes that allow American companies to outsource jobs overseas and eight times to create loopholes that would enable them do so. In addition, he says, the GOP wants to continue Bush tax cuts that benefit the wealthy. “Republicans have rejected middle-income tax cuts every chance they got and are proposing a repeat of the Bush policies. In their own words, they’d do nothing different from what they’ve done in the past,â€ Clyburn says.

If the GOP gains control, University of Michigan political scientist Vincent Hutchings asserts, far more emphasis would be placed on deficit reduction and lowering taxes than providing services to help individuals hurt by the downturn. “This is not a party that historically has sought to provide jobs for lower middle-income and working-class people. That’s not their constituency,â€ he maintains. Hutchings also believes that Democrats have been “mostly indifferentâ€ to specific concerns of African Americans but Republicans would be “hostile.â€

Hill Harper on ‘Waiting for Superman’: “It vilifies teachers”