25 Most Heartfelt #NeverForget Moments Dedicated to 9/11 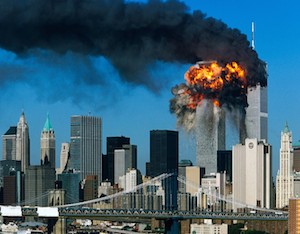 Image: State Of The Nation

“We cannot erase every trace of evil from the world,” President Obama said today as people commemorated the tragedy of September 11, 2001. “Small groups of killers have the capacity to do great harm. That was the case before 9/11, and that remains true today.”

In the weeks and days leading up to 9/11, twin lights illuminated the New York skyline to pay tribute to the destroyed families and a world that forever changed after the horrific events. With thousands of lifeless individuals swirling at the forefront of everyone’s mind, it is without shock or even awe that a new building stands directly where the towers fell.

There’s a museum that is dedicated to forever enshrining the legacies of those who put their lives on the line; those who lost their lives trying to fight; and keeping the world on notice that terror exists around the globe. American history, which is constantly being written, is on full blast today as Americans the world over memorialize the fallen on the 13th year of 9/11.

As families of the victims gathered in unison in the Lower Manhattan area of New York, at the Pentagon in Washington, D.C., and at an airfield in Pennsylvania, Twitter joined in on the celebration with some heartfelt moments pegged to the hashtag #NeverForget. We decided to compile the ones that tugged on our heartstrings and share them with you all.