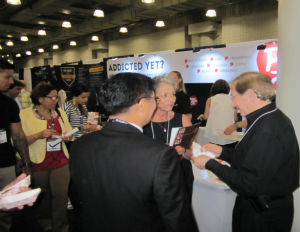 A world of opportunity for potential franchisees opened Thursday, June 19 at New York’s Jacob K. Javits Convention Center and continues over the next three days.

That’s when the 23rd annual International Franchise Expo officially kicked off. Sponsored by the International Franchise Association and hosted and produced by MFV Expositions, the event has been taking place for 25 years and it’s the third consecutive year it’s being held in New York city. The expo looks to provide the platform for current and prospective entrepreneurs to connect with top franchise executives.

Tom Portesy, president and CEO of MFV expositions says the expo will be calling New York home for many years to come. He says hosting the event in the big apple has been a “game-changer.â€

“When we moved from Washington, DC to New York, three years ago, the show doesn’t resemble what it used to be. It just exploded. I think this year it may be the biggest franchise expo in the world.”

The expo is showcasing more than 400 franchise concepts and is expected to host more than 20,000 attendees from 50 states and 80 plus countries.

Some of them will get a chance to learn more about franchise industry with more than 70 seminars, breakout sessions, and forums for prospective franchisees. After checking out the many booths, there are is a treasure trove of seminars to help interested attendees better run theirÂ potential franchise, learn about running businesses in diverse communities, and explore strategies for growth.

Many of the others attending the event walked in ready to sign up.