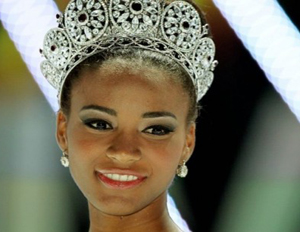 Africa continues to be a hotspot of economic growth, professional opportunity and major boss moves, and women continue to have a vital hand in expanding that success. From Goldman Sacs powerhouse Lisa Opoku Busumbru, who was named one of Black Enterprise’s “40 Rising Stars 40 and Under” to tech entrepreneur Juliana Rotich, their contributions have impacted the continent and world at large tremendously, across industries including entertainment, business, science and the arts.Â

Forbes details 20 top female leaders in Africa to watch now and into 2013, serving as inspiration and catalysts for global innovation and progress.

Leila Lopes, Angola, 2012 Miss Universe
On Sept. 12, 2011, Lopes was crowned Miss Universe, becoming the first Angolan woman to win the position, the fourth African to win the title (Miss South Africa took the title in 1978, Miss Namibia won in 1992, Miss Botswana won in 1999) and the second Black African woman to win following Mpule Kwelagobe from Botswana in 1999. As the reigning Miss Universe, Lopes used the platform for advocacy for HIV and AIDS patients worldwide.

Biola Alabi, Nigeria, Managing Director, MNET Africa
As managing director for multi-national cable and satellite content company, MNET Africa, Alabi is one of the most powerful women in African media. Named a 2012 Young Global Leader by the World Economic Forum, she has been at the forefront of the expansion of the AfricaMagic channels brand across the continent. In 2010, she served as a member of the World Economic Forum’sÂ Global Agenda Council on the Future of Entertainment.