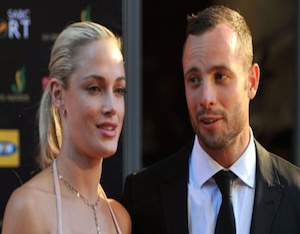 In South Africa, Oscar Pistorius is regarded as a legend. The amputee athlete competed in events around the world and became an inspiration for competitors who strived to surpass the odds.

The 27-year-old Paralympics champion would go on to compete at the 2011 World Championships in Athletics and became the first amputee to win an able-bodied world track medal. The moment propelled him further into the world’s consciousness where he began to live the life of an athletic superstar celebrity type.

Last February, during the American holiday of Valentine’s Day, Pistorius shot and killed South African model Reeva Steenkamp, who was his girlfriend of three months. The incident occurred at his home in Pretoria and he acknowledged to authorities that he shot her, causing her death, but claimed that he mistook her for a possible intruder.

With that the trial became must-see as the evidence didn’t quite align with Pistorius’ claims. The Olympic runner underwent psychiatric evaluation to established criminal motive behind his actions. Public opinion had already made up their mind, as the amputated athlete was guilty in their eyes. But today, September 11, a high court judge found Oscar Pistorius ‘not guilty’ of murder, but negligible in Reeva Steenkamp’s passing.

While he may still be found guilty of culpable homicide and some gun charges, the overwhelming disappointment conjures up memories of O.J. Simpson’s original ‘not guilty’ verdict. Twitter, always ready to share its opinion on a subject and make it trend, gave its reactions to Oscar Pistorius being found ‘not guilty’ for shooting and killing his girlfriend. We placed a spotlight on the 15 most fiery reactions for your perusal and to provoke thought.

Please scroll through the gallery below and share your comments in the section.