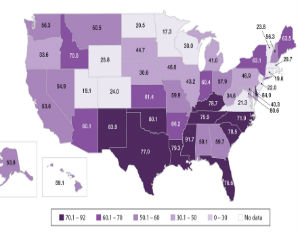 Fact 1. Both cognitive and soft skills–such as perseverance, tenacity, and social skills–play an important role in shaping economic outcomes.

[Related: These Colleges Are Changing the Lives of Low-Income Students]

Fact 3. Educational attainment has increased in the United States, especially among women.

Fact 4. Americans who did not attend college form a larger share of those who live below the poverty line.

Fact 5. An additional year of schooling increases earnings and reduces the likelihood of an individual being unemployed, on welfare, or in poverty.

Fact 7. On average, states with higher concentrations of children in poverty receive less antipoverty (Title I) funding per child.

Fact 9. The salary of public school teachers has declined relative to other career options.

Fact 11. Most education spending comes from state and local revenues.

Fact 13. Interventions for older children are not too late–interventions during high school can also raise graduation rates.

Fact 14. Several charter schools have been successful at raising student achievement, but gains are not universal.