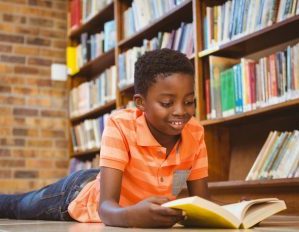 You may have heard about Marley Dias, a young girl who at the age of 11 began collecting books in which black girls are the main character.

“My motivation is I already love to read but it would be awesome, even better, to read with other people,â€ Sidney is quoted as saying in an article on The Huffington Post. “I want to keep doing it because I don’t know what will make me stop reading because I love to read.â€

Here’s more about Sidney and Books N Bros from that article.

An 11-year-old from St. Louis wants to celebrate black books and improve the literacy rate among other boys at the same time.

Sidney Keys III started his own reading club for boys called Books N Bros to show his peers that reading can be fun.

Sidney told radio programÂ “St. Louis on the Airâ€ earlier this monthÂ that “every time I go to the library at my school, there aren’t many African American literature books there.â€Â After a visit to EyeSeeMe,Â a bookstore in University City, Missouri,Â that promotes African American children’s literature, he yearned to see more of himself reflected in books.

Sidney’s mom, Winnie Caldwell, shot a video of him reading in the store in August that gained more than 62,000 views. She told the program that her son had never been to a store that housed so many books that reflected his culture.

“You get to a point when he is 11 years old and it was so shocking for him to relate to someone on the cover in a positive aspect rather than it be some negative urban story we see a lot,â€ she told the local outlet. “I would like to make sure he sees himself in being whatever he can be.â€

Caldwell said her son immediately had the idea to form a book club, using EyeSeeMe as itsÂ designated bookstore, after the video gained popularity.