100 Black Men of the Bay Area Gather for Change 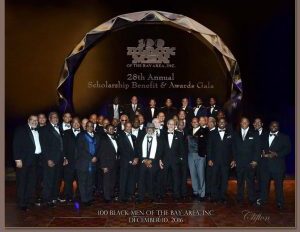 The 100 Black Men of the Bay Area organization recently gathered together to celebrate theÂ 28th annual Scholarship Benefit and Awards Gala–and what a night it was.

After an auction-style fundraiser, awards were presented to recipients that have conducted life-changing efforts in the community. Some of the recipients includedÂ Kimberly Bryant from Black Girls Code, for the Community Service award; Barbara Rodgers for the Lifetime Achievement award; Chuck Baker for the 100 Black Men Member of the Year award; and Frank Tucker for the President award. TheÂ evening concluded with a performance from former American Idol contestant, LaToya London.

The organization came out in full-on black tie, with their dates sporting outfits fit for the swankiest, red carpet award show. Although everyone looked dapper, Langston Walker, parliamentarian for the 100 Black Men of the Bay Area, wanted us to know that this organization is not just about socializing, and President Frank Tucker shares Walker’s sentiments.

Started in 1988, the 100 Black Men of the Bay Area is one of 116 chapters in the international network of 100 Black Men. “We have maintained our status as one of the larger and most thriving chapters in the network, covering a full array of accomplished African American men. We have entrepreneurs, doctors, lawyers, educators, clergy, and that’s because our focus is connecting these young men with accomplished mentors in their perspective fields,â€ Tucker says.

Tucker says that there are four pillars the organization uses, to ensure that the young men participating in the organization are successful; mentoring, education, economic development, as well as health and wellness. “The organization’s main goal is community service. Uplifting the African American community through the leadership of black men is what we focus on,â€ he says.

Of those four pillars, the one that rises to the top is mentorship. “I was always told two things, when I had a mentor, ‘Do the best you can with what is being passed on to you. Then, when it’s your turn, do the same thing for somebody else,â€ says Vice President Muhammad Nadhiri.

In addition to anÂ already eclectic group of initiatives, the Bay Area chapter has started what they are calling, “100 for Life.” It is a set of resolutions that they’ve taken to local governments, such as Oakland, CA, and Alameda County, CA. They are geared toward changing local laws to eliminate, or minimally reduce, the volume of police shootings and unwarranted brutality of unarmed African-American men and women.

“Based on the 100 Back Men’s request, the city of Oakland has enacted an ordinance that we’re calling, ‘100 Eyes,’ which encourages and allows citizens to shoot cell phone videos, when they see police-to-citizen contact,â€ says Tucker.

So far, the organization has put their money where their mouth is. The Bay Area chapter of the 100 has given over $1.25MM since 1988; $50K+ per year for over 20 years, to both young men and women awardees. These individuals have chosen various fields in college and have gone on to attend HBCU, Ivy League, public, and private schools.Â

This year, they began a high school scholarship program, with two students who are currently attending Bishop O’Dowd. This is their effort to start their impact with a younger demographic. 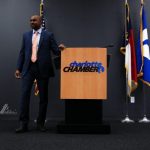