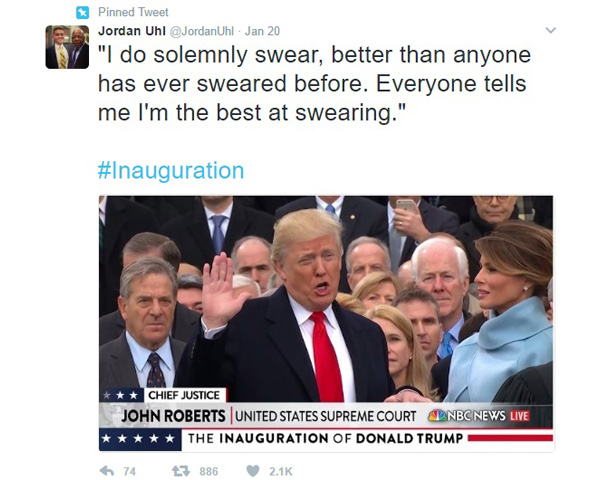 Humor is hard. It’s even harder to be amusingly sarcastic in 140 characters. Yet, there are those who have elevated pedestrian internet trolling to wickedly sharp social protest and commentary on Twitter.

The target of their biting wit is President Donald Trump. The new POTUS’ unorthodox, brusque, and often baffling way of using Twitter as a means of official communication is nothing anyone has ever seen before from a politician. He insults, whines, and changes his policy positions like a swift-moving wind on the social media platform.

Many Twitter users engage in mercilessly mocking of Trump. Here are ten of the best of the bunch (in no particular order):

@tonyposnanskiÂ is a writer, who attracted attention by going public with his weight loss of 200 pounds in a year. He has been featured in The Huffington Post and on CNN. Writer, performance artist, actor, and comedian, Kristina Wong (@mskristinawong), is outspoken in her tweets about Trump. “I guess I am just screaming into a void, when I feel as though I have to scream into a void,â€ he says.Â  However, “I don’t know if I think of replying to his tweets as trolling. I’m not expecting a response,â€ says Ayers. He also stays active outside of Twitter for “causes I joke and feel about.â€ Tommy CampbellÂ (@MrTommyCampbell) is a comic, writer, and actor, who has appeared in The Dark Knight, Edge of Tomorrow, Doctor Who, Arrow, and doesn’t consider himself a troll, rather,” an educated critic.â€

“Trolls merely tweet hate and cower behind avatars, whereas I am totally open about who I am, and my responses to Donald Trump have a lot of wit. Challenging an issue with a bit of sharp humor can help raise awareness, and I’m glad to do it,â€ says Campbell. Matt Haig (@matthaig1) is a writer and author of the Sunday Times bestseller, Reasons to Stay Alive. Sharika Soal (@LadyThriller69) is an L.A.-based entertainment, celebrity, and special events publicist and a strategic marketing consultant. She founded LadySoal PR, launching national media campaigns for a wide variety of clients, including those in the recording and television industries.

Still, Soal finds the time to drag Trump and the rest of his advisers on Twitter for their antics. She is an activist, outspoken in her views.

“I consider myself a human rights activist, who chooses a non-violent way of protesting. I am here, and I hope that I make someone out there, who may not have the courage to confront [Trump], feel a little bit a joy that there is someone who does,â€ she says.

Her work as a publicist provides her with insight into what makes Donald Trump tick. “What I saw during Trump’s campaign was ‘Trump courage’; people who felt the courage to voice their opinion, which was mostly racist and bigoted, out loud and proud. It scared me. Also, I am a publicist, so I understand that Trump thinks with a ‘get-in-the-news’ frame of mind,â€ Shoal says.

“I am passionate about the safety and well-being of all that reside in America, even if they support Trump. I take the actions of Congress very seriously, and feel that Trump is trying to distract, as many celebs do, to hide what is going on in the background. You know, that whole ‘get the major headline, and then BOOM; so-and-so’s album drops next week’–that kind of thing. It infuriated me that he was treating Twitter like his TV show, instead of like the American people, who [now must] call him President.â€

“What Trump is doing is wrong, and I am here to call him out, and meet him head on. As long as he is on Twitter acting the way he does, then I will be there too,â€ she says. Jordan UhlÂ (@JordanUhl)Â is a photographer and writer in Washington, D.C. His work has appeared in Washingtonian, The Independent, A+, BuzzFeed, Fast Company, Upworthy, and many other leading websites and publications. He also graduated with a B.A. in Political Science and a master’s in Public Administration.

Uhl uses his political knowledge to his advantage, when trolling Trump. But for Uhl, it’s more than just about trolling. “It should be said, I do want Trump to do well, and for all of us to benefit, and I agree with him at times. But when he punches down from his position of rich, white privilege, it’s both divisive and antithetical to what my view of America is. As a white male, I recognize my privilege and want to use it to advocate for others who can’t. So, to use my voice in that way is empowering and exciting. Also, it’s the first time my Political Science degree has come in handy,â€ he says. Mike Denison (@mikd33) is a Boston artist. His work includes Bea Arthur and Betty White-themed art projects, #BeaADay and #BettyADay, which pay tribute to the Golden Girls actresses. Denison’s art has been featured in The Huffington Post, A.V. Club, People, as well as on TV shows The Today Show, Broad City, Comedy Central’s @midnight, the Nightly Show With Larry Wilmore, and many other media outlets. Â His recent artwork, a depiction of Donald Trump as Jabba the Hut with Lady Liberty as the enslaved Princess Leia, has gone viral.

About his pointed, online jabs at the new administration, Denison says, “I feel that, as citizens, not only is it our right, but our duty to criticize those we pay to run our country; especially if we don’t agree with their approach, and what they might represent. I am operating on a human level, and worry that certain people are not. I include humor in my work, as laughter, to me, is the ultimate form of escapism. If I can get a message across while making someone laugh, then I’ve done my job.â€

Bess Kalb (@bessbell) is the Emmy-nominated writer for Jimmy Kimmel Live! Her writing has appeared in The New Yorker, GQ, Wired, and other top publications. Mrs. Betty Bowers’account (@BettyBowers) parodies an evangelical white lady while skewering right-wing views. The account was created and is managed by Andrew Bradley.