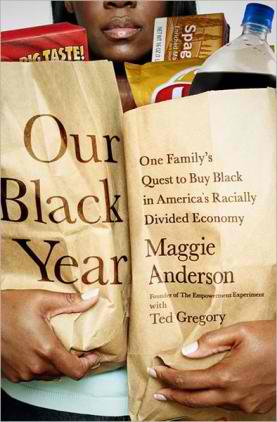 A little more than three years ago, John and Maggie Anderson, a well-educated, upper-middle-class, professional couple living in suburban Chicago, decided to spend more of their income with black-owned businesses as a means of providing much-needed economic stimulus to struggling black communities. The Andersons, parents of two young daughters, embarked on a journey–called The Empowerment Experiment–during which they vowed to spend only with black-owned businesses for all of 2009. The story of that year is told by Maggie Anderson, with Pulitzer Prize-winning Chicago Tribune reporter Ted Gregory, in a provocative and inspiring new book, Our Black Year: One Family’s Quest to Buy Black in America’s Racially Divided Economy (PublicAffairs; $25.99).

The Andersons, driven in equal parts by Obama fever, middle-class guilt, and the knowledge that strong black-owned businesses are a key source of desperately needed jobs for African Americans, approached their experiment with the heated fervor of crusaders and cold objectivity of socio-economic researchers. The Empowerment Experiment was conducted as a research project via a foundation set up by the Andersons, which partnered with Northwestern University’s Kellogg Graduate School of Management’s Levy Entrepreneurship Center for the study. A website dedicated to the cause, EEforTomorow.com, serves as a hub of information about black-owned businesses and self-help economics.

The Empowerment Experiment also drew hefty national media attention from outlets ranging from CNN to Black Enterprise. (In addition to being featured in our magazine and appearing on the Black Enterprise Business Report television show, Maggie documented some of her experiences as a guest blogger for BlackEnterprise.com.) However, in her book, Maggie reveals the previously untold truth about her family’s experiences with a no-holds-barred disregard for political correctness. For example, she details her crushing disappointment with a prominent group of Chicago’s black business owners who she says reneged on an initial promise to help finance The Empowerment Experiment. She is also brutally honest about the substandard and mediocre black-owned firms she and her family encountered.

Our Black Year is a must-read for entrepreneurs, especially those black business owners who are frustrated by what they perceive as a lack of support from African American consumers. Following the Andersons’ story provides valuable insights into location, pricing, and customer service issues that can serve as significant barriers between black businesses and the consumers who want to patronize them. Entrepreneurs who choose to not react defensively, but to focus on reducing or eliminating those barriers have the potential to be handsomely rewarded in terms of bottom-line sales and customer loyalty. The Andersons are proud of and passionate about–and even emotionally bonded to–those business owners who went out of their way to cater to their needs and exemplified entrepreneurial excellence. Besides that, the book is simply a fantastic read.