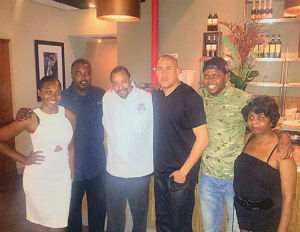 “As an African American chef and owner of a restaurant, I’ve always wanted a place for black chefs to come and be themselves, show what they can do and how they want to do it,” saidÂ Chef Lance Knowling. I’m 51 years old. Back in my day it was hard for black chefs to get “airplay.” So this was very important to me. Both Chef Maxcel Hardy and myself are personally familiar with the culinary skills of most of the chefs chosen for the Black Chef series, said Chef Lance Knowling.

Former Hell’s Kitchen contestantÂ Chef ‘JR’ and founder of Kitchen Cray, is the kind of chef who knows how to wow the crowd with personality and flavor. With enough energy to light up a football stadium, Chef JR walked around BluJeen restaurant welcoming guests with a huge smile and then returning to the kitchen to cheer on his staff. “I’m from Harlem so this is home for me. I really appreciate Chef Lance Knowling andÂ Chef Maxcel Hardy for this opportunity. So tonight is all about family. We put together a family-style menu so people can connect and build relationships because that’s how you succeed in life. I want people to walk with a new relationship. And, I want people to walk away with a piece of me,” said Robinson.

Well from the “looks and tastes” of things, Chef JR accomplished his goal. Every single thing was cooked to perfection.Â The night kicked off with guests enjoying vodka cocktails, conversation and an inviting spread before sitting down for the main course. The mouthwatering family style menu featured seared scallops withÂ English pea puree, lobster and bacon bits; summer caprese salad with balsamic glaze and fresh basil; a whole deep fried red snapper over a housemade creole sauce topped with pickled peppers; chicken piccata with housemade red-skin garlic mash and wilted spinachÂ topped with a lemon garlic caper sauce. And for dessert, guests enjoyed a sinfully delicious house made funnel cake topped with vanilla ice cream and a Dusse glaze.

“I’ve worked in various restaurants representing Thai, Italian, and French cuisines,”Â said Robinson.”Â I also learned to cook from my grandmother, who’s from the South. So tonight you’ll taste a mixture of Caribbean with Thai style flavor, and you’ll also taste some soul food influence. I don’t want people to feel like they’re sitting in some “stuffy” restaurant. I want people to eat and have fun.”

Fun times were had by all! But if you missed your chance to dine with some of the best African American chefs in the world, the Black Chef Series continues on Aug. 3, with Chef Kenneth Collins. To purchase tickets, visit Eventbrite. Follow @BlackChefseries on Instagram, Twitter, and Facebook.

Anthony Anderson Says: Don’t Compromise Who You Are In Order To Succeed

The Rise of Female Coaches in Men’s Sports